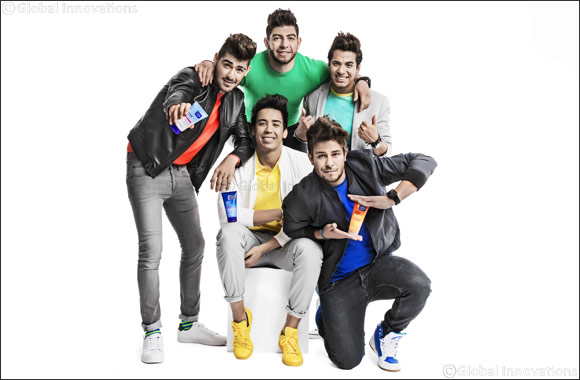 Dubai, UAE, May 8, 2016:  Teen skincare brand Clean & Clear® is boosting their ongoing engagement with Arab teen girls with an exciting new update to their #SeeTheRealMe movement: a collaboration with the region’s #1 boy band The5, to fan-source lyrics via social media for the band’s new single, ‘SeeTheRealMe.’  One lucky contributor will even be added to the girl-team Clean & Clear® is sending to Writing Camp with the band, to help produce the single itself.

The new initiative kicks off today, on May 1 and mobilizes fans across the region to show off their skills throughout the month on any or all of social platforms: Facebook, Instagram, Twitter, or Tumblr. Fans can send their submissions in any format (video, pictures or written entries) and use the hashtags #SeeTheRealMe and #Write4The5.

The Clean & Clear® girl-team will subsequently be assembled—a squad of four girls who will bring their talent and passion to the Writing Camp, to be held in Dubai this July.

“Our 2016 iteration of #SeeTheRealMe is an evolution of what we brought to girls across the region last year: content that inspires them to share who they really are with their family, their friends, and the world, at a time and place in their lives where that can be very scary,” said Brenna Deck, Assistant Brand Manager, Clean & Clear® MENAP.

“But this time, with the star power of our new partners The5, the stakes are higher and the rewards much greater for girls who rise to our challenge and demonstrate this courage.  We’re not just celebrating these girls by giving them an anthem—we’re giving them the opportunity to write their own anthem.”

The5, the Pan-Arab boy band sensation including members Ahmed Hassan (Egypt), Adel Echbiy (Morocco), Kazem Chamas (Lebanon), and Said Karmouz and Mohamed Bouhezza a.k.a BMD (Algeria), are thrilled to partner with Clean & Clear® to deliver such a rewarding and enriching experience for their millions of fans. With two #1 hit singles already released, over 4 million followers online, a debut album on the way, and the Nickelodeon Kids Choice Awards ‘Best Arab Act’ in the bag, 2016 is set to be the year of The5.

Now, The5 will collaborate directly with their and Clean & Clear®’s mutual fan base.  The campaign will culminate with the summertime release of the single #SeeTheRealMe and the official music video, both to be created during July’s Writing Camp.

To join Clean & Clear® and The5’s #SeeTheRealMe journey, follow them on their social platforms listed below.