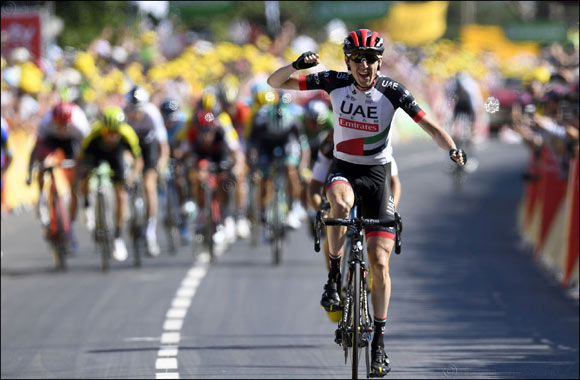 Share Home >> Entertainment
Dubai, UAE, July 14, 2018:  Today, Dan Martin earned the second Tour de France stage win of his career and in doing so became the first ever UAE Team Emirates rider to claim the coveted prize. The Irishman, who finished sixth in yesterday’s race, has looked strong in the saddle all week and had highlighted this stage as one of his main goals for the Tour. The team protected Martin well throughout the 181km route from Brest to Mur de Bretagne allowing him to match all the attacks and accelerations in the final kilometres of the race. On the final climb to the line, Martin timed his own attack to perfection and, as the gradient ramped up to 12%, he animated the race by powering away from the peloton and holding off the chasers to take  UAE Team Emirates’ first stage win of this year Tour de France.
Commenting on today’s result, Martin said: “This is such an amazing feeling for me because I’ve had so many second places at the Tour since winning my first stage in 2013. I was really relaxed all day and I was really looking forward to having a crack. When we got closer to the finish I was a bit nervous because of the head wind and I didn’t think it was going to happen. Then the race went really hard during the first part of the climb and a lot of riders got dropped and at that point I noticed that I didn’t have any team mates left so I thought why not have a try – and I did.
He continued: It was the same place that I tried to attack in 2015, but got boxed in. It was a case of waiting for everybody to be in the red, because I know I can go further into the red. I put in an explosive attack that I didn’t know I still had, but there was no way I was letting anyone beat me to the line. Thankfully the legs were there and they took me all the way. Getting this victory - especially as the team’s leader and not just a GC rider - makes the tour a success already and now anything else is a bonus.”
Tomorrow’s Stage 7 leaves Brittany from the town of Fougères, and heads west towards Chartres along a flat 231km route. Whilst the stage is relatively simple, it is the longest in this year’s Tour. The course is also known for its fierce cross winds in the final kilometers, which will force the formation of echelons and cause problems for the riders hoping to contend a bunch sprint finish.
Stage Six Results
1. Dan Martin (Ire) – UAE Team Emirates 4:13:43
2. Pierre Latour (Fra) – AG2R La Mondiale +0:01
3. Alejandro Valverde (Spa) – Movistar +0:03
General Classification Standings
1. Greg Van Avermaet (Bel) – BMC Racing Team 22:35:46
2. Geriant Thomas (GBr) (Team Sky) +0:03
3. Teejay Van Garderen (USA) – BMC Racing Team +0:05
21. Dan Martin (Ire) – UAE Team Emirates +1:27