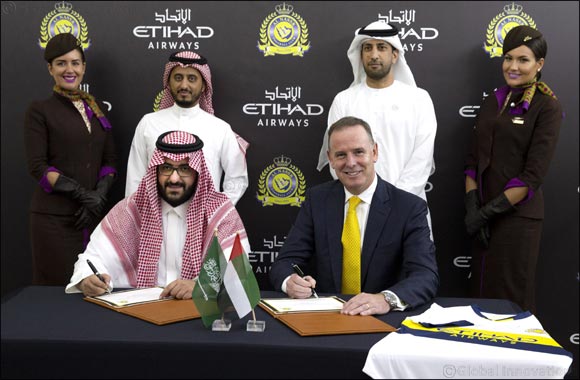 Share Home >> Travel & Tourism
Abu Dhabi, United Arab Emirates, August 16, 2018:  Etihad Airways, the national airline of the United Arab Emirates, has signed an agreement to be the official shirt and main sponsor and partner of the Riyadh-based, Saudi Stars League team, Al Nassr FC.
The multi-season partnership was signed today at Etihad Airways’ Innovation Centre in Abu Dhabi, and was attended by senior members of both organisations’ leadership teams.
Players from the football club were also in Abu Dhabi for the announcement, including Saudi national players, Mohammed Al-Sahlawi; and Ibrahim Ghaleb; and international stars Ahmed Musa and Noureddine Amrabat.
Tony Douglas, Group Chief Executive Officer, Etihad Aviation Group, said: “This agreement signals the start of an exciting new partnership between Al Nassr, one of Saudi Arabia’s best-known football clubs, and Etihad Airways. We look forward to our teams working together to promote the two brands in our home markets as well as across the region.”
Commenting on the partnership, Saud Al Sweilem, Chairman of Al Nassr FC said: “We are delighted to have signed with Etihad Airways, one of the world’s leading airlines and a brand that supports football in many markets. I believe that together we can deliver a mutually beneficial partnership as well as present something new and exclusive to Al Nassr fans.”
In addition to appearing on players’ shirts on all home and away games, Etihad Airways will work closely with Al Nassr on areas of brand partnership, marketing, customer and loyalty initiatives, social media outreach, inflight programming and travel trade support.
Mr. Douglas continued: 'We have experienced first-hand the growth of Saudi’s inbound tourism to Abu Dhabi and this new partnership reflects the importance of Riyadh and the Kingdom of Saudi Arabia to the airline. We look forward to working with Al Nassr to cooperate more deeply on commercial and community initiatives going forward.'
The new Al Nassr shirt, bearing the Etihad Airways logo, will make its debut on Thursday 30 August, when the team takes on Ohod at the Prince Mohammad bin Abdulaziz Stadium in Medina.
One of Saudi Arabia’s most popular football clubs, Al Nassr was formed in 1955 and plays its matches at the King Fahd Stadium and Prince Faisal bin Fahd Stadium. Wearing its home colours of yellow and blue, the club’s nickname is “The International” due to is famous history in global competitions.
Etihad Airways has built a portfolio of international sports sponsorships which includes the Formula 1™ Etihad Airways Abu Dhabi Grand Prix, Manchester City FC, and the Abu Dhabi HSBC Golf Championship.
Etihad Airways currently operates 77 flight per week to Saudi Arabia; three return flights a day to Riyadh, three return flights a day to Jeddah, and four return flights a day to Dammam, as well as daily seasonal flights to Medina.