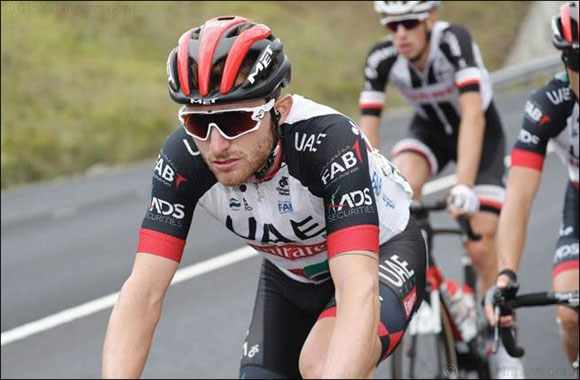 Share Home >> Entertainment
Dubai, UAE, September 17, 2018:  UAE Team Emirates’ Italian power-house Simone Consonni rounded off La Vuelta on a high, placing seventh in a fiercely contested bunch sprint in the Spanish capital of Madrid. The well-earned position adds to his growing palmares, which now features four top ten finishes in this year’s Tour of Spain – the biggest stage race of his professional career.
Stage 21, which is traditionally viewed as a procession for the General Classification riders, set off from Alcorcón and then looped back into Madrid, finishing with a series of laps around a 5.9km street circuit to make up the 100.9km pan flat route. In the final two laps of the city the peloton speed ramped up in excess of 70km/h as the fast men battled their way to the front of the pack on a technical course with multiple chicanes and 180 degree turns. Throughout the final run in, Consonni kept a cool head amongst a field of world class sprinters as he came from behind many of his rivals to snag a respectable seventh place, only a few bike lengths behind stage winner Elia Viviani (Quick Step Floors).
Commenting on the final stage of his first Grand Tour, Consonni said: “I finished quite a positive Vuelta. I was always able to contest the sprints and finish inside the top 10, except for stage 18, where I placed 11th. Today I still had good legs and I had hoped for better, but the final run in was chaotic and I wasn’t able to launch my sprint in the best position. However, I am proud to have been able to finish my first big stage race. Now I want to recover for a few days and on Thursday I’ll be back racing in Italy”.
Despite a experiencing bad luck and misfortune, which included a heavy crash in stage 17 and a high fever the following night, UAE Team Emirates’ GC Leader Fabio Aru continued to ride with pride in the Tour of Spain finishing the race just outside the top 20 .
The Vuelta a Espana was won by British rider Simon Yates (Mitchelton Scott) who completed the 21 stages and 3,255kms in just over 82 hours.
Stage 21 Results:
1. Elia Viviani (Ita) Quick Step Floors 2:21:28”
2. Peter Sagan (Slo) BORA - hansgrohe”
3. Giacomo Nizzolo (Ita) Trek - Segafredo ”
7.   Simone Consonni (Ita) UAE Team Emirates “
General Classification Standings:
1. Simon Yates (GBr) Mitchelton-Scott 82:05:58“
2. Enric Mas (Spa) Quick Step Floors +1:46”
3. Miguel Angel Lopez (Col) Astana Pro Team +2:04”
23. Fabio Aru (Ita) UAE Team Emirates +1:03:07”