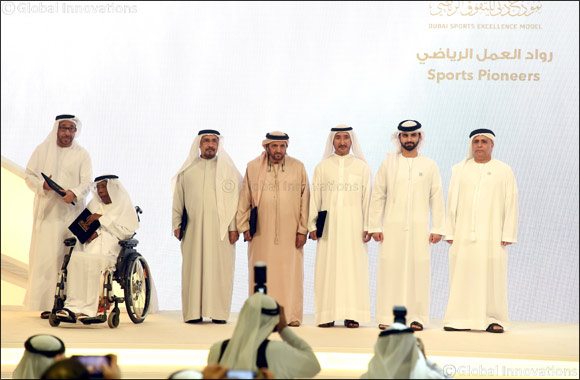 HE Mattar Al Tayer, Vice Chairman of Dubai Sports Council, was present at the awards, which were organised by Dubai Sports Council under the slogan 'Unlimited Ambitions', along with HE Saeed Hareb, Secretary General of DSC, and a number of other sports dignitaries.

Abdullah Mohammed Hareb Al-Falahi, a former secretary of UAE Football Association and one of the founding members of Al Wasl Club, was also honoured as a Sports Pioneer along with Khalifa Sultan bin Suleiman, a former member of the National Olympic Committee’s Board of Directors; Abdullah Abdul Rahman Al Saye, the first Emirati to become chairman of the UAE Referees' Committee; and Gomaa Ghareeb Mubarak, the first manager of the UAE national football team (1972 Gulf Cup) and the first national coach of the team in 1973.

The Dubai Sports Excellence Model has been designed with the Dubai Plan 2021 in mind and it seeks to implement the Government’s strategic directions to support and develop the sports sector in Dubai and help it reach international standards. The Model also follows the vision of Dubai Sports Council, which is to create a distinguished and happy sports community.

Waterfront Market Introduces Safe Entertainment for Kids and an Array of Food Of ...

10 Reasons Why Sharjah is Your Perfect Shopping Destination This Summer

Blue Prism Positioned as a Leader in the Magic Quadrant for Robotic Process Auto ...

No Premium Without Responsibility: BMW Group Makes Sustainability and Efficient ...

Why LED Technology is The Future of Indoor Digital Signage

Sharjah Shopping Promotions Draws a Smile on Faces of 3 Lucky Winners of (BMW – ...