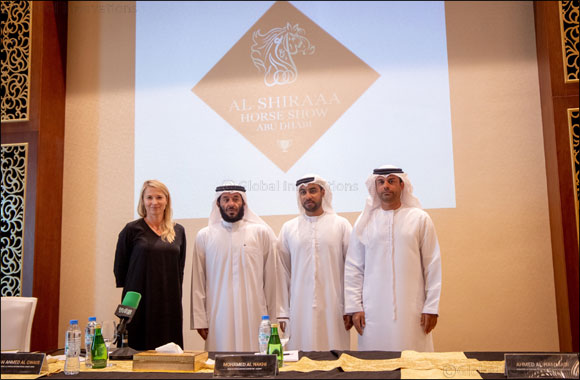 January 6, 2019 , Abu Dhabi:   The Al Shira’aa International Horse Show®, which gets underway on Wednesday January 9 and runs until Saturday January 12, is to feature an honour roll of the best showjumpers from around the world.

Riders will compete for a share of the €270,000 prize purse as well as all-important Longines ranking points for the 2022 World Equestrian Games (WEG).

With free entry for all, visitors to the show will enjoy the competition in the Al Shira’aa Arena as well as the family friendly activities in the Al Shira'aa Village, which includes children’s activities, pony rides, a Parkour workshop, gourmet food trucks and designer tack shops.

In a new addition to the event, and a first for the region, the Al Shira’aa International Horse Show® will showcase the Emirates Motor Company Al Shira’aa Derby.

A jumping Derby features different types of fences to a regular showjumping class, and can include ditches, banks and hedges, requiring supreme athletic ability from the horse and brilliance and daring from the rider.

“This year we wanted to offer our spectators something a little different,” said Omran Ahmed Al Owais, Event President, Al Shira’aa International Horse Show. “Al Shira’aa Stables is the title sponsor of the Al Shira’aa Hickstead Derby in England and we wanted to bring a little bit of that magic to the UAE.

“We are also very pleased with our rider line-up this year. The high profile names that we continue to attract to Al Shira’aa are testament to the quality of our show and also speak to the growing international popularity of the UAE tour. Of course none of this would be possible without the generosity and vision of our partners who, like Al Shira’aa, understand the importance of investing in our sport at both the grass roots and elite levels.”

Al Shira’aa Stables®, which works alongside the UAE Equestrian and Racing Federation (UAEERF), is a long-term supporter of equestrian sport not only in the UAE but also on a global scale. Al Shira’aa hosts three shows during the UAE season including the FBMA Ladies Show as well as the two-day CSI1* Al Shira’aa Show, which starts today (Sunday January 6) at the Al Forsan Equestrian Club.

“The one star event, which launches Al Shira’aa International Show week, is another innovation,” said Mr Al Owais. “We are always seeking different ways to support showjumping in the UAE and this smaller international event will shine the spotlight on the local equestrian community, with a programme of classes designed to cater to all rider abilities.”

HE Dr Ghanim Mohammed Al Hajry, Secretary-General of the UAEERF said: “As the UAE Equestrian and Racing Federation we aim to develop horse sport in this country while at the same time nurturing the heritage and tradition that is closely tied to the sport. We find Al Shira’aa Stables to be closely aligned to our principles and are very pleased to support the Al Shira’aa Horse International Show.”

“The Al Shira’aa International Horse Show, and the many other events on the Al Shira’aa calendar, provide opportunities to riders of all ages and levels, from juniors to world top ten. We are always happy to work alongside Al Shira’aa Stables as we pursue our shared goals together.”

Raysa Al Ketbi, CEO, FBMA – “The long association between Al Shira’aa Stables and the FBMA underlines our joint commitment to furthering the development of Emirati women in the sporting sphere.  Al Shira’aa, like the FBMA, understands the significant benefits to be gained by society as a whole when we encourage our women to participate in regular sporting activity, whether for leisure or at elite level.”