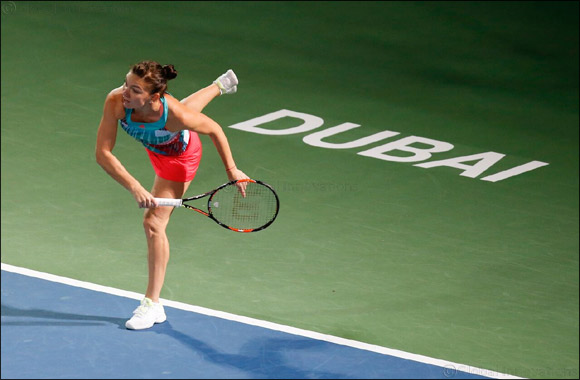 Dubai, UAE, January 16, 2019:  World No. 1 Simona Halep is eagerly looking forward to making a return to the Dubai Duty Free Tennis Championships for the first time in three years when play kicks off next month.

The Dubai Duty Free WTA Player Ambassador heads an incredible field that includes all but one of the top 10 as she seeks to regain the title she last claimed in 2015. Since then she has risen to the very summit of the game and become a Grand Slam champion.

“We are thrilled to welcome back Simona Halep to the Dubai Duty Free Tennis Championships,” said Colm McLoughlin, Executive Vice Chairman and CEO of Dubai Duty Free. “It has been fascinating to watch her reach new heights since she was here in 2016, and we are sure that she will continue to be a major force in the game for many years to come. We wish her well as she attempts to add another title to her already wonderful collection.”

It is almost impossible to understand the sense, not only of pride and accomplishment, but relief when you finally achieve a life-long ambition, something that is so difficult that only a very few manage it in their lifetime. When she won the French Open last year she did something that she might have had just the faintest feeling she might never do. She had failed there twice before after reaching the final, and just months before she had left Melbourne empty-handed after losing the title match to Caroline Wozniacki.

Finally, though, she triumphed with a hard-fought win over Sloane Stephens, doing it the hard way by battling her way back from a set down.

“I dedicated myself 100%, so many years,” Halep told Donald McRae in The Guardian. “Now I’ve won a Grand Slam and I start to enjoy life more. I like to go out, make friendships. I’m more open. Before I won the French I was very focused. Everything I had dreamed was real in that moment. All the people I love were there and when I lift the trophy, and the national song is played, it was the best moment I ever had. I was crying because it was huge. Maybe it will be my best moment as an athlete. But let’s see. Maybe the future will give me even more.”

Now the breakthrough has been made there is no reason to doubt that more Grand Slam titles will follow. But this season, at least for a few months, Halep faces a new challenge after her coach, Darren Cahill, chose to spend time with his family. She still talks with him regularly but is trying to get through tournaments with no-one by her side.

'The situation is that for the next three to four months, I don't want to take the coach,' Halep told WTA Insider. 'I just go with the flow and I'll see how it works, kind of, alone. Actually, it's tough a little bit, but I feel confident that I can do my own things on court. I'm more responsible now on everything that I have to do. Maybe it's a good thing, I will see.

'I just want to chill. I had enough tension during these years. Now I feel like I don't want to commit to anyone because when you take a coach you have to commit to that person and you want to do the best for him and the team.”

“The challenge that Simona Halep faces is daunting, but she has shown that she can overcome any challenge,” said Tournament Director Salah Tahlak. “We can look forward to a wonderful week of drama and excitement as she attempts to regain her title.”

The fantastic week of women’s tennis will be followed by an equally thrilling men’s extravaganza headed by seven-time champion Roger Federer.