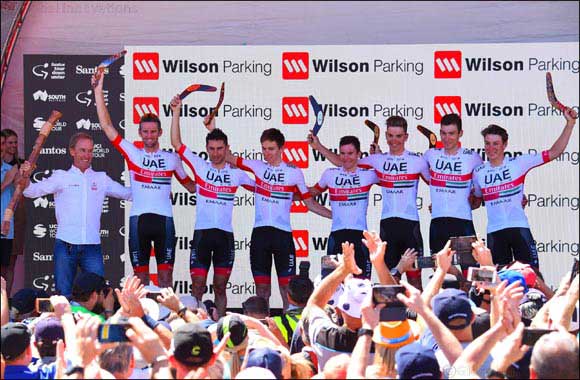 Share Home >> Entertainment
Dubai, UAE, January 21, 2019:  The 2019 Tour Down Under ends successfully for the riders of UAE Team Emirates, who got their season off to a flying start by taking the overall team classification in the first UCI World Tour Race of the year.
The team rode consistently well from the first stage until the last, wrapping up a hard fought tour on the iconic climb of Willunga Hill. Three riders from the team, directed by Neil Stephens, made the top spots- exceeding the high expectations established beforehand. Diego Ulissi arrived at the top of Willunga Hill in eighth place just 17″ behind the day’s winner Riche Porte. New signing Tadej Pogačar came in 15th just 20″ behind first spot, followed closely by Jan Polanc in 17th just 30″ down.
In the General Classification, Ulissi finished 9th, 40″ off the overall winner Daryl Impey (Mitchelton Scott). Pogačar was 13th (43″ down) and Polanc was 15th (53″ down).
These results built on the success of Saturday’s race which saw Jasper Philipsen win Stage 5 after a bunch sprint finish.
“It was a beautiful result for UAE Team Emirates. To get on the podium as the best team in the first World Tour race of the year is amazing,” said sports director Neil Stephens. “Today we achieved more goals that we were after. We wanted to take the team classification but to try to be in the best possible spots in the individual classification. We achieved that considering that we have three riders in the top 15 of the classification, with Ulissi in the top 10. The great work that characterises this group added up over the week. It’s an important factor that will show positively in the next wave of competitions“.
Stage 6 results
1. Richie Porte (Trek-Segafredo) 3h30’14”
2. Wout Poels (Team Sky) s.t.
3. Daryl Impey (Mitchelton-Scott) s.t.
8. Diego Ulissi (UAE Team Emirates) 17″
Final overall classification
1. Daryl Impey (Mitchelton-Scott) 20h30’42”
2. Richie Porte (Trek Segafredo) 13″
3. Wout Poels (Team Sky) 17″
9. Diego Ulissi (UAE Team Emirates) 40″