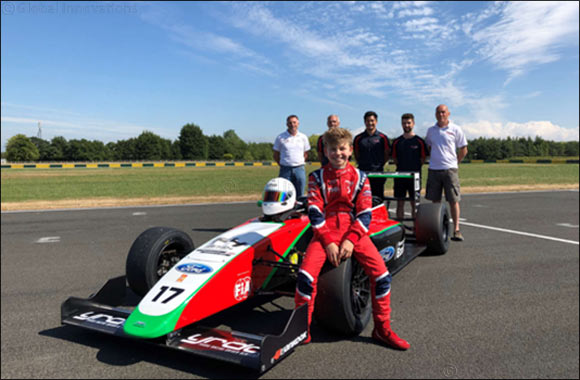 14-year-old Alex, will be one of the youngest drivers in British F4 history when he makes his debut for the Arden team this season.

Alex is a UAE born, racing driver, who started racing in November 2013 in the Sodi World Series (SWS) Junior Cup at Dubai Kartdrome.

After making his karting debut, he spent the following two seasons competing in the UAE's Rotax Micromax and IAME X30 Cadet championships, before graduating into the X30 Junior and Rotax Junior Max championships with Energy Dubai.

Alex joined the Young Racing Drivers Academy (YRDA) in February 2017 and is the latest member of the elite driver training programme to graduate to British F4 with Arden.

Alex will arrive in British F4 fresh off the back of a solid testing programme, where he acclimatised himself with the Ford Eco-Boost powered machinery in preparation for his Rookie season in single-seater racing.

“I’m really excited to have this opportunity to race with Arden in the British F4 Championship.  The guys at the YRDA have put a lot of effort into helping me in the simulator and in the gym. This has meant that the testing programme has gone well and I’m getting more confident in the car with each test. I know that the championship attracts the best young drivers from around the world, but I am certainly going to do my best and hopefully achieve some podium finishes along the way”, said Alex Connor.

Garry Horner, Arden Team Principal: “We are delighted that Alex will be racing with Arden in the 2019 British F4 Championship. We have been monitoring his progress very closely as he is a member of the Young Racing Driver Academy and look forward to seeing him convert the talent and promise that he has shown in testing into podium success with us this season.”

The 2019 British F4 Championship will begin at the Brands Hatch Indy Circuit in Kent, on the 6-7 April for the opening three races of the season.