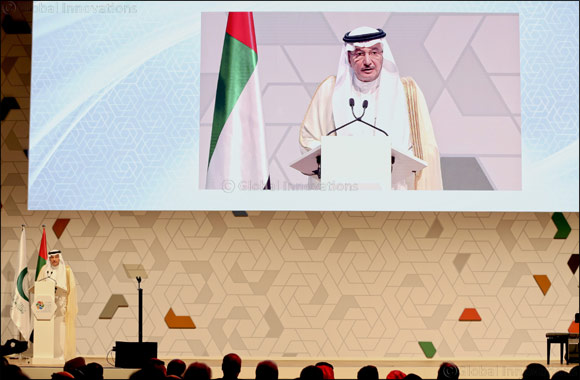 Share Home >> Government, Legal & Humanity
Abu Dhabi, April 24, 2019:   His Excellency Sheikh Nahyan bin Mubarak Al Nahyan, UAE Minister of Tolerance today opened the 2nd Organisation of Islamic Cooperation Festival, a four-day celebration of Islam  in cooperation with the UAE Ministry of Foreign Affairs that will unite nations from across the Islamic world in a tailored platform shedding  light on the cultures, traditions and values of the Islamic faith.
Running from April 24-27 under the theme ‘One Nation Unified by Benevolent Cooperation, Justice & Tolerance’, the festival, at Abu Dhabi National Exhibition Centre (ADNEC), serves as a vehicle to celebrate the underlying positivity of Islam and demonstrate the work of the Organisation of Islamic Cooperation (OIC) in cultivating cultural diversity through essential elements such as arts and music. It will also shine a light on how Muslims worldwide can preserve their religious principles while adapting to different cultures.
With 57 member states across four continents, the OIC is the second largest international organisation after the United Nations and serves as an umbrella of 1.5 billion Muslims around the world to express their views, protect their interests and enhance communication with the world.
'The OIC Festival is a great occasion to shed light on the values and principles of Islam and to provide vivid examples of the ability of Muslims around the world to adhere to their religious principles and values while adapting to different cultures,' said H.E Sheikh Nahyan in his opening address.
“This festival contributes to strengthening the values of solidarity and cohesion in line with the objectives and contents of the 'Year of Tolerance' initiative and the UAE's commitment to spreading the message of tolerance around the world.'
His Excellency praised the role of the OIC in protecting the vital interests of Muslims around the world, in addition to working to consolidate world peace.
Dr. Yousef bin Ahmed Al-Othaimeen, Secretary General of the Organisation of Islamic Cooperation, said the festival is an important educational platform that provides Muslims with an opportunity to explore the diversity of their faith while providing non-Muslims “with an opportunity to get a closer look at our true religion.”
“The festival is a gateway through which Muslims around the world will gain valuable insights into the diversity of their cultures and traditions in our Organisation while preserving the tolerant religious values of Islam,” added Dr. Al-Othaimeen.
During its four-day run, the festival will spotlight the diverse cultures and traditions across the Islamic world. The main stage will feature a packed schedule of live performances from folklore groups stretching from the UAE to Indonesia, Saudi Arabia to Bukina Faso and across the Muslim world.
Throughout the four days, the stage will offer a tailored platform for a series of lectures, presented by prominent figures representing leading institutions that have had a profound impact on the entire Muslim community, aimed at promoting Islamic culture.
Other highlights include a series of exhibitions and art workshops that highlight the work of Islamic calligraphy, artists highlighting evolution of the art to appeal to new generations while remaining true to its origins.
The festival presents a collection of rare manuscripts in the various sciences, arts and types of fonts, ranging from the third century AH, until the fourteenth century AH, including verses from the Quran.
Meanwhile, the children’s entertainment area will feature Hakawati story sessions with renowned storyteller Ahmed Yousef and painting and drawing activities, while the Tilt Brush sector will allow visitors to create their own calligraphy.
Sami Yusuf holds a concert at the Emirates Palace Hotel
Award-winning singer and songwriter and global humanitarian around the world, will perform a special concert at the Emirates Palace in Abu Dhabi following day two of the festival on April 25.
In line with the event’s objectives to spread the message of tolerance, unity and celebration of diversity. Tickets are still on sale at www.ticketmaster.ae
The Festival, which will be held in Hall 7 at ADNEC, is open from 12pm to 8pm on 25 and 27 April, and from 4pm to 10pm on 26 April. Entry is free to all.