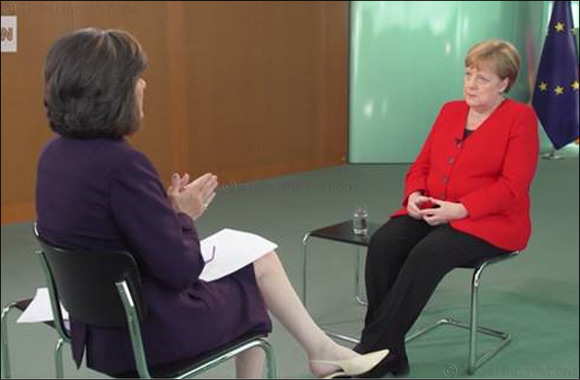 Angela Merkel warns against dark forces on the rise in Europe

Discussing a decisive moment of her chancellery, Merkel says that she does not regret pulling away from nuclear energy in Germany, stressing the importance of renewable energy for working towards a cleaner environment.

Referring to her decision to let so many immigrants into Germany, Merkel states that “in a humanitarian emergency we stepped out and helped.” Today she calls for countries to work together when it comes to tackle immigration in the long run: “We as states have to manage, we have to guide immigration. But not in the sense that we shut ourselves off from each other but that we help each other in these humanitarian situations of emergency but also open up opportunities on the ground.”

Merkel describes her relationship with US president Trump as being characterized by “close cooperation”. According to her, debates are resolved by finding common ground in the end. “The president has his opinion, I have my opinion and very often we also find common ground, if not, we have to keep on talking and negotiating.”

On her role as a feminist, the Chancellor quotes the Dutch queen by saying that “feminism means women having the same rights everywhere and this is parity what this is all about, from politics to the media, to the business community, that must be our objective. We are not there yet […].”

Following the European elections, Chancellor Merkel said that the rise in the Green vote has a lot to do with the issues people are interested in, like climate change, and that her party has to give better answers now to all of these issues.

On antisemitism, the Chancellor said that Germany has to be more vigilant than other countries because of its history.

The full interview will air on Amanpour on Wednesday 29 May at 11am HKT on CNN International.