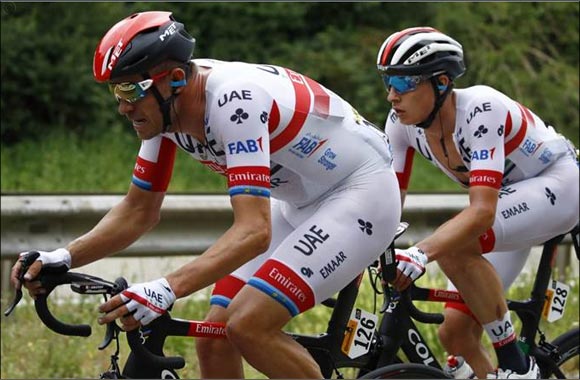 Share Home >> Entertainment
Dubai, United Arab Emirates -  13July  2019:   UAE Team Emirates’ young up and coming talent, Jasper Philipsen put in another noteworthy performance at the Tour de France to claim an impressive 5th place finish in the chaotic bunch sprint finish that concluded Stage 7. Philipsen was one of two riders from the team to contest the sprint, with Alexander Kristoff coming in just behind him in 10th place. The race was won by Dylan Groenewegen (Jumbo Visma) after a mammoth 6 hour stage.
Stage 7 was to be the longest at this year’s tour, a 230km pan flat route from Belfort to Chalon-sur-Saone. For the majority of the stage it looked as if the peloton had decided to give itself a day off after yesterday’s brutal outing in the mountains, riding the first 225km of the route at a relatively slow pace. It wasn’t until the final 5km that the sprinters’ teams began to get organised and up the work rate, making the technical run in to the line even more nerve racking. Sven Erik Bystrom was able to get Kristoff into a good position, but the increased number of riders at the front of the pack during the business end of the race made it more difficult for the lead out trains to work effectively.
During the chaos of the final kilometer Kristoff was unable to hold Philipsen’s wheel and the two riders were separated. Philipsen continued to drive forward with the ambition of supporting Kristoff and in doing so, he was able to match some of the world’s fastest riders and take a well-deserved fifth spot. Kristoff, always the fighter, continued to battle on using what was left in his legs to steal a top 10 finish.
Talking directly after the race, Philipsen said: “The plan was for me to pull for Alex. Initially he was on my wheel and then because of the situation he lost it. I tried to drop back to make contact but we were on different sides of the road by then. With 300m to go I noticed I had a gap so I opened up my sprint and went full gas. Maybe if I hadn’t been looking back I could have taken fourth place, but it was strange to be sprinting for myself.”
Kristoff added: “Out of the last corner I was quite far behind, but Sven did a tremendous job to bring me up. However, it cost me a lot of energy to come back from that position and by then the race was over for me. I had a great position but no legs. From 2km to the line is critical and today I lost it in that section.”
In the General Classification, Dan Martin remains in 18th position after his effort in the mountain on Stage 6 saw him rocket 17 places in the over standings.
Tomorrow’s race sees the peloton travel south from Macon to Saint Etienne over 200km of lumpy terrain for Stage 8. There’s no less than seven climbs that will test the legs of the riders before they hit a slight uphill drag on the final kilometer to the line.
Stage 7 Results
1. Dylan Groenewegen (Ned) Jumbo Visma 6:02:44”
2. Caleb Ewan (Aus) Lotto Soudal s.t.
3. Peter Sagan (Slo) Bora Hansgrohe s.t.
5. Jasper Philipsen (Bel) UAE Team Emirates st
10. Alexander Kristoff (Nor) UAE Team Emirates st
General Classification
1. Giulio Ciccone (ita) Trek Segafredo 29:17:39”
2. Julian Alaphilippe (Fra) Deceuninck Quick Step +0:06”
3. Dylan Teuns (Bel) Bahrain Merida +0:32”
18. Dan Martin (Ire) UAE Team Emirates +1:46”