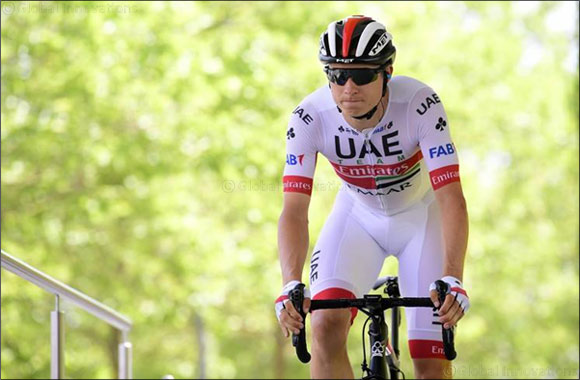 Share Home >> Entertainment
Dubai, United Arab Emirates -  18 July  2019:   UAE Team Emirates’ Jasper Philipsen and Alexander Kristoff finished 7th and 9th respectively in today’s sprint finish, despite a mechanical in the final 500m that prevented Kristoff from fully exploiting another impressive lead out from the team’s up and coming young Belgian rider. The race was won by a matter of inches by Caleb Ewan (Lotto Soudal) who marginally pipped Dylan Groenewegen (Jumbo-Visma) to the line.
Stage 11 came after a well earned rest day for the riders and eased them back into racing with a relatively short 167km flat route from Albi to Toulouse. The day played out as expected with the inevitable breakaway being slowly reeled back in by the chasing peloton. Dan Martin was kept safe by the team’s domestiques and managed to avoid the crashes that temporarily split up the peloton, ensuring he reserved his energy for the upcoming mountain stages.
In the final two kilometers, Philipsen and Kristoff worked well together and forced themselves into a great position for the impending sprint – but as the race hit the business end, Kristoff experienced a mechanical issue that prevented him from opening up his trademark powerhouse finish. Philipsen once again showed his strength by continuing on to the line with both riders finishing in the top 10 for a second time.
Commenting on the lead out, Philipsen said: “In the final kilometer Alexander had a mechanical problem. It happened at a really bad moment. I tried to support him, but the line was coming up fast. I was ready to launch the sprint but on my left another rider dropped his chain which was pretty frustrating. So, between the mechanicals and the positioning it wasn’t exactly the perfect scenario for us.”
Kristoff commented: “I dropped my chain with just over a kilometre to go. Just as the team trains were moving up I tried to jump on their wheel and it dropped on the inside. Jasper tried to help me but it was too late so I told him to give it a go himself. By the time I got back up it was too late.”
Sports Director, Neil Stephens added: “I think the riders rode really well throughout the stage. Unfortunately we just weren’t able to get the win here in Toulouse. The run in to the line was good – all the guys worked well to get Jasper and Alex in a perfect position. But a rub of wheels in the last kilometer threw him off a bit and it wasn’t to be.”
Stage 12 signals the first Pyrenees mountain stage of the Tour as the peloton heads from Toulouse to Bagneres de Bigorre over 209.5km of lumpy terrain that features one category 3 and two category 1 climbs before ending with over 20kms of fast and technical descents to the finish line.
Stage 11 Results
1. Caleb Ewan (Lotto Soudal) 3:51:26”
2. Dylan Groenewegen (Team Jumbo-Visma) st
3. Elia Viviani (Deceuninck - Quick Step) st
7. Jasper Philipsen (UAE Team Emirates) st
9. Alexander Kristoff (UAE Team Emirates) st
General Classification Standings
1. Julian Alaphilippe (Deceuninck - Quick Step) 47:18:41
2. Geraint Thomas (Team INEOS) 1:12”
3. Egan Bernal (Team INEOS) 1:16”
9. Dan Martin (UAE Team Emirates) 2:09”