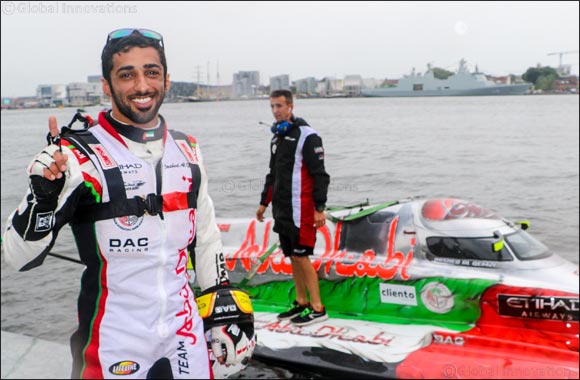 Share Home >> Entertainment
Back at the scene of breakthrough F2 victory, Team Abu Dhabi  driver aims to build on championship lead
Abu Dhabi , United Arab Emirates -  03, August 2019:   Team Abu Dhabi’s Rashed Al Qemzi, back at the scene of his most significant victory yet in international powerboat racing, has a second UIM F2 World Championship crown firmly in his sights in Norway.
Al Qemzi, F2 champion in 2017, leads the 2019 series after his opening round win in Lithuania last month and has had only one target on his mind since arriving in Tønsberg for Sunday’s Grand Prix of Norway.
“I feel great to be back in Norway,” said the Emirati driver today, ahead of the evening Speed Run and Match Race series. “I have very good memories of winning here two years ago and how important that result was to help me take the championship.
“I’ve won the title once and want to win it again. I crashed out here last season but I’ve put that behind me. Winning in Lithuania has given me a lot of confidence and now I want to build on my lead in the championship.”
While Al Qemzi was making a flying start to the championship in Lithuania, Team Abu Dhabi’s other F2 challenger, Rashed Al Tayer, had a frustrating weekend, crashing in qualifying and then going out of the Grand Prix when his boat was rammed.
But being part of the Team Abu Dhabi crew who captured the World Endurance title earlier this month has given him a major boost. “I feel good, I feel positive,” said Al Tayer. “I’ve forgotten about what happened in Kaunas. This is another race and it’s a new start for me in the championship and I’ll do everything I can to win.
“I finished third in Tønsberg last year when another boat ahead of me was disqualified and there were a lot of accidents. Hopefully we won’t have that this time.”
Free practice in Tønsberg starts at 1.30pm tomorrow (Saturday) followed at 5pm by the three-stage qualifying session for Sunday’s Grand Prix of Norway getting under way at 4.30pm.