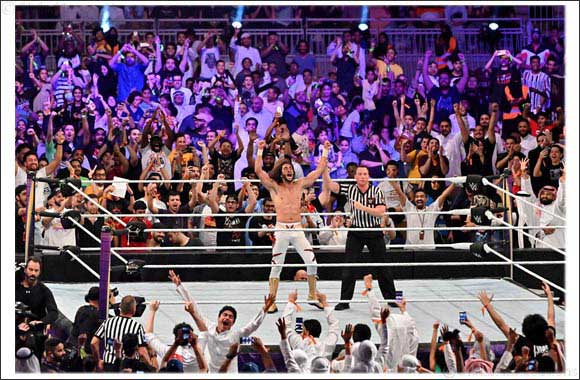 2019 was a breakthrough year for Mansoor, who secured impressive victories at both Super Showdown and Crown Jewel

WWE star Mansoor says his personal highlight of what was an incredible 2019 was beating Cesaro at Crown Jewel in Riyadh with his friends and family watching on from ringside.

There is no doubt 2019 was a year to remember for the Saudi-born wrestler, who as well as making his TV debut in February, went on to compete at two huge events in his home country.

The first of those, Super Showdown, took place in Jeddah in July, with Mansoor unbelievably defying the odds to come out on top in the 50-man Battle Royal.
“The Battle Royal was special because I was going in as a complete unknown,” he recalls.

“I thought if I could stay in until the last 10 people that would be great, and then when there were only a few of us left I think people were wondering what was going on.

“Because I wasn’t an established name at that point, my win was a real shock and a true underdog story, but it was an amazing feeling for me and to be able to celebrate with the Saudi fans is something I’ll never forget.”

Another pivotal moment for Mansoor came at Crown Jewel in Riyadh, when he faced Cesaro, an established and experienced opponent, in his biggest singles match to date.

“Cesaro is such a talented wrestler so to fight him on the big stage was incredible, it could have gone a number of ways but luckily I won which was the dream outcome,” says Mansoor.

“Not only did I win the match and make my family, who were in the front row, very proud, but I got to show what I can really do in the ring. People started to look at me differently after that match so it was something really special.

“Some true WWE legends, such as Hulk Hogan and Ric Fair, were also involved that night and to speak to them and listen to their advice afterwards was absolutely fantastic for me because there is a long way to go in my journey.”

The impact and popularity of WWE across the region continues to rise, and with further Saudi shows set for 2020 and beyond, Mansoor believes it’s an exciting time.

“It’s great that the thousands of WWE fans across the Middle East are now being given opportunities to watch their heroes perform live in the region because when I was younger that was never the case,” he says.

“Both Super Showdown and Crown Jewel were fantastic events this year, with huge numbers attending. The popularity of WWE in this part of the world is only going to increase and I’m really looking forward to being a part of that.

“My primary goal right now is to win a championship in Saudi Arabia. I would really love to share that moment with the crowd. For a Saudi wrestler to win a title on home soil would be truly special.”