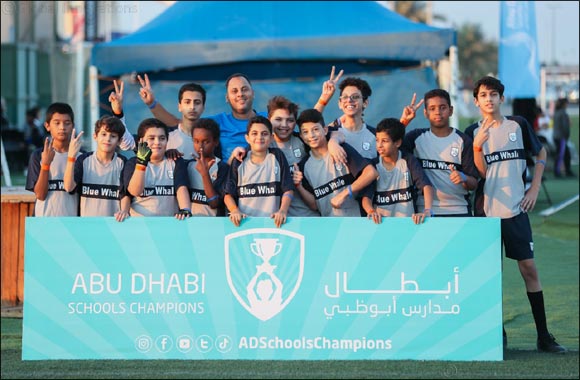 Abu Dhabi, UAE – January 8, 2020:   Abu Dhabi Schools Champions, organized by the Abu Dhabi Sports Council in partnership with the Ministry of Education, the Department of Knowledge and Education, and Inspiratus resumes action this weekend in Abu Dhabi, Al Ain and Al Dhafra, following the school break.

The action resumes for students of both genders in Cycles 1, 2 and 3 on January 10th in Abu Dhabi and Al Ain and will kick off on January 17th in Al Dhafra.

Abu Dhabi Schools Champions enables public and private school children to compete in popular sanctioned sports including football, basketball, volleyball, handball, athletics, gymnastics, and swimming. It is also designed to provide UAE clubs a pipeline of athletes for UAE clubs, through its talent identification platform. Scouts attended various games to identify and select talents for their teams and scouted talents will undergo a selection process with rounds of trials and annual announcements for selected players.

ADSC is open to all public and private schools, free of charge, encouraging the youth of Abu Dhabi to be active, gain tournament exposure at world-class standards and to be discovered by Abu Dhabi clubs, which has attracted a great wave of schools to register in the biggest sporting competition in Abu Dhabi.

The Abu Dhabi Schools Champions Finals will be held in Abu Dhabi and will include a community festival with an awards ceremony announcing the winners and recognizing outstanding athletes. Prizes include professional training camps with Abu Dhabi Sports Council’s global partners, trips to see live professional league matches and visit some of the world’s best sports clubs as well as tickets to global sports events organized by Abu Dhabi Sports Council, where they will meet the world’s best athletes.