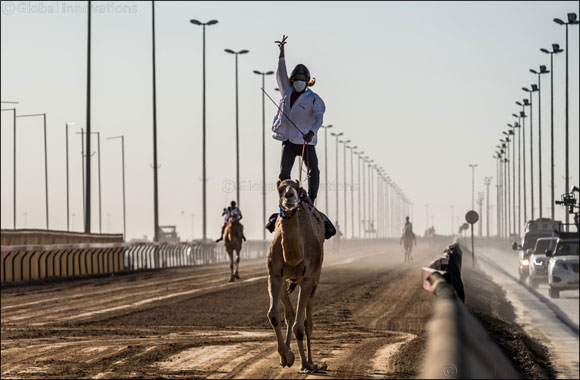 Organized by the Hamdan Bin Mohammed Heritage Center (HHC) in cooperation with the Dubai Camel Racing Club, the National Day Camel Marathon is held annually in conjunction with the Arabian Camel Festival under the patronage of His Highness Sheikh Hamdan bin  Mohammed bin Rashid Al Maktoum, Crown Prince of Dubai.

Two preliminary races were held for camel riders above 30 years old prior to the 5th National Day Camel Marathon, which will take place on February 7, also at Al Marmoom Camel Race Track.

Yahya and his camel Al Ramas dominated the second preliminary race on Friday after conquering the 6-km distance in 10 minutes and 46.18 seconds. He brought home Dh15,000 for his feat.

Yahya dominated the race from the get go and registered a strong finish. After pulling away from the pack, he stood up and rode on top of his camel, waving confidently to the crowd composed of various nationalities, in the last few meters of the race.

Second place went to Hamad Muhammad Al Mazrouei and his camel, Sogan, who finished with a time of 11 minutes and 5.86 seconds.  Hamdan Obaid Al Ketbi, who rode a camel named Abu Al Makarem, came in third at 11 minutes and 17.09  seconds.

Earlier, at the first preliminary race, Khamis rode ahead of the pack race, that covered a distance of 4 km, with a time of 7 minutes and 12.24 seconds. He also won Dh15,000.

For their feat, the Al Ketbi brothers are touted as strong contenders to dominate National Day Camel Marathon on February 7 that will cover a distance 11 kms.

“The experience we got in the preliminary races will surely give us great confidence heading into the main National Day Camel Marathon,” the Emirati brothers said.

The two preliminary races held exclusively for camel riders above the age of 30 had a total cash prize of Dh100,000.  H.E. Abdullah Hamdan Bin Dalmook, CEO of HHC, said the two preliminary races were organised to boost the level of competition in the National Day Camel Marathon by allowing participants to get more training opportunities and be more familiar with the racetrack.