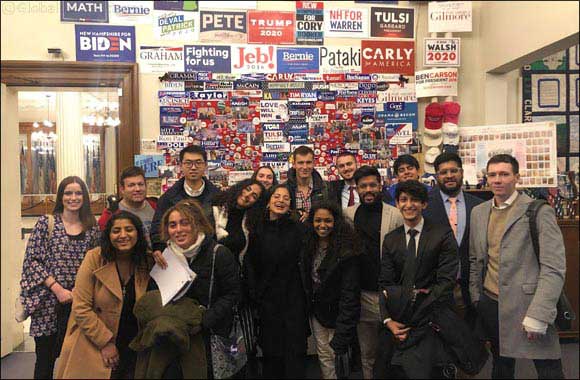 Share Home >> Education & Training
● During this unique January Term course, students met with five leading democratic presidential  candidates: Joe Biden, Elizabeth Warren, Andrew Yang, Tulsi Gabbard and Michael Bennet, and saw Bernie Sanders, Pete Buttigieg and Amy Klobuchar live
● The students also met with journalists, political consultants, elected officials, and voters to understand the key aspects of a campaign
Abu Dhabi, UAE, 03 February 2020:   This January, 15 NYU Abu Dhabi (NYUAD) students from across the globe got a unique, on-the-ground look at how the US electoral process really works. The students traveled to Washington, DC, New Hampshire, and Iowa to see what is takes to become President of the United States in a special January Term (J-Term) course Electing the President: An Up Close Look at How American Elections Really Work, taught by American political consultant and best-selling author Frank Luntz. Students also got to see first-hand the Senate impeachment trial.
The 15 students -- from Australia, Egypt, China, India, Ukraine, Greece, Slovakia, Equator, Sri Lanka, Hong Kong, Nepal, and the US -- met with democratic presidential candidates Joe Biden, Elizabeth Warren, Andrew Yang, Tulsi Gabbard and Michael Bennet, and saw Bernie Sanders, Pete Buttigieg, and Amy Klobuchar live.
They also interacted with journalists (Jonathan Karl, Margaret Talev, and Jennifer Jacobs); political consultants (Jim Margolis, Larry McCarthy, and Brad Parscale); elected officials (US Senator Ben Sasse (R-NE), US House Republican Leader Kevin McCarthy (R-CA), Congresswoman Cheri Bustos (D-IL), Congressman Will Hurd (R-TX), Congressman Gregory Meeks (D-NY), Congressman Joe Kennedy (D-MA), Senator Joe Manchin (D-WV), former Massachusetts Governor Duval Patrick, New Hampshire Governor Chris Sununu, Iowa Governor Kim Reynolds, and former Iowa Governor/Secretary of Agriculture for the Obama Administration, Tom Vilsack), and Mike McCurry, former White House spokesman for the Clinton Administration, as well as voters themselves in real time – as the two most important events in the presidential calendar – the Iowa caucus and the New Hampshire primary – played out in front of them.
The course gave students a front row seat to see the specific skills and techniques utilized by the men and women who seek to become president – and how voters interpret those efforts in their decision-making process. From raising money to crafting a message, grassroots organization to debate preparation, and social media to traditional media, the most influential people in American politics will provide students with an opportunity to learn from those who shape and wield these political tools masterfully.
American political consultant Frank Luntz commented: “Imagine the United Nations traveling on a bus together through the snows of Iowa and New Hampshire, tracking politicians the way meteorologists track the weather. Only these are college students from NYU Abu Dhabi, they like each other, and they seek the truth about and from those who wish to lead the United States for the next four years.
'This course offers NYU Abu Dhabi students unprecedented access to the presidential candidates and political leaders who are shaping public policy locally, nationally and internationally. From the halls of Congress to the streets of Iowa and New Hampshire, the 15 students from 11 countries not only see the presidential campaign firsthand but they get to question the participants.  There is no course like it anywhere in the world.'
'For me, the highlight was a tie between former Vice President Joe Biden insisting on taking a selfie of himself with the NYUAD students and the session we had with White House Chief of Staff Mick Mulvaney.  Everywhere we went, the presidential candidates and political leaders were as eager to meet the class as the class was to meet them.'
Throughout the course, students honed their analytical, communication, and writing skills through written assignments, group work, and class discussion, and debate in addition to the special guest lectures. The first eight days were conducted in New Hampshire, during which there was a one-day trip to Boston so that students could see and learn about the origins of American democracy. The last eight days were held in Des Moines, Iowa just two weeks before the first public vote of the 2020 election. While in Iowa, four of the students addressed the annual meeting of the US Conference of Mayors.
Carlos Riofrio, Ecuador, Class of 2021, double major in Economics and Social Research and Public Policy with a minor in Mathematics said: “This class allows me to understand the truth behind politics. It allows me to see behind the political strategy of different candidates and the real problems in the US. Struggles comparatively similar to those in developing countries around the world.'
Caroline Sullivan, US, Class of 2021, majoring in Social Research and Public Policy with a minor in Economics said: “As an American, I was eager to learn more about the campaign process and the state of politics in the country. The most rewarding aspect however, was the direct engagement with voters on all sides of the political spectrum and the chance to learn what frustrates, scares, and motivates them this election cycle.”
The objective of this class was for students to see the election process and the various candidates with their own eyes, and compare what they see with what they read online, and watch on television. By hearing, seeing, and questioning the key people in these fields, students are able to develop their own perspectives on the American democratic process.
The course was one of several J-Term courses offered this year by NYUAD. The courses are designed as immersive experiences in the UAE and abroad. Reaching beyond the classroom, these courses incorporate experiential learning, and are often site-specific and connect students to the place where they study.