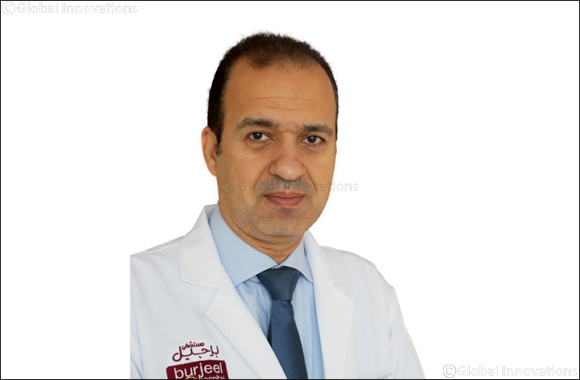 Share Home >> Healthcare & Medicine
United Arab Emirates. 13 August 2020:   Breastfeeding is the gold standard of infant nutrition and has lasting health benefits for the baby and the mother. Burjeel Hospital Abu Dhabi strongly supports the World Breastfeeding Week, to raise awareness about breastfeeding and improve the health of infants all over the world under the theme “Support breastfeeding for a healthier planet.'
Burjeel Hospital is pleased to join more than 120 countries around the world to spread a vital message about the benefits of breastfeeding. According to Dr. Ahmed Mohamed Abdelaal, Consultant – Pediatrics at Burjeel Hospital Abu Dhabi Breastfeeding is undoubtedly the best nutrition mothers can give to their baby rather than putting expressed milk in a bottle. It also has added benefits for a mother.
Dr. Ahmed Mohamed Abdelaal shares the importance of breastfeeding and health benefits for both mother and child throughout their life.
Breastfeeding is one of the most effective ways of providing children with the nutrients they need and ensure child health and survival. WHO recommends mothers worldwide to exclusively breastfeed infants from the first hour until the child reaches six months to achieve optimal growth, development and health. It is advised that the supplementary food is added gradually while continuing to breastfeed until the child reaches two years of age or more.
Benefits of Breastfeeding
• Breast milk is safe, clean and contains antibodies, antioxidants and prebiotics, that strengthens the child's immunity and helps protect against many infectious diseases such as gastritis, diarrhea, pneumonia, ear infections and so on.
• Breastfed children are known to have higher IQ, are less likely to be overweight or obese and are less prone to diabetes later in life. It also enhances the bond between the child and the mother.
• The positive effects of breastfeeding include better health for both mothers and children. Breastfeeding promotes better health for both mothers and children. Increasing breastfeeding to near-universal levels could save over 800,000 children's lives a year worldwide, particularly children under six months of age.
• Women who breastfeed also have a reduced risk of breast and ovarian cancers, type 2 diabetes, and heart disease.
• It is also estimated that increased levels of breastfeeding can prevent up to 20,000 maternal deaths annually from breast cancer.
Lastly, Dr. Abdelaal stresses mothers on breastfeeding their infants as it leads to continued health benefits for both mother and child. And most importantly, it protects them from many illness and diseases in the later stages of their lives.