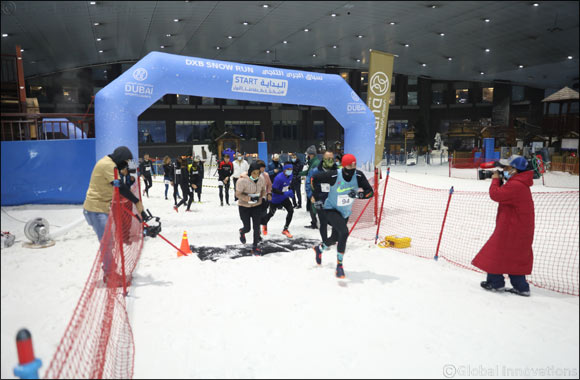 Dubai - United Arab Emirates, August 15, 2020:   Buti Al Nuaimi of the UAE and Pia Hansske of Germany were fastest in their respective categories in the DXB Snow Run at Ski Dubai, Mall of the Emirates, on Friday morning.

Organised by Dubai Sports Council in cooperation with Ski Dubai as the opening act of the two-day ‘DXB Snow Week’, the DXB Snow Run saw a vibrant collection of men and women, representing 46 different nationalities, turn the venue into a carnival despite the early Friday morning start.
The Runners started streaming in as early as 5:30am, with the first wave starting at 6:30am, the second at 7:15am and the third at 8:00am. His Excellency Saeed Hareb, Secretary General of Dubai Sports Council, flagged off the race, alongside Mohammad El Etri, Director of Majid Al Futtaim Global Snow, and Nasser Aman Al Rahma, Assistant Secretary General of Dubai Sports Council, to check on the preparations for the DXB Snow Run.

Running in temperatures below -4C, Al Nuaimi finished at the top of the leaderboard with a time of 17 minutes and 36 seconds for the 3km run. Mohsen Hassan Al Ali, also of the UAE, had the second fastest time of 17:42, while Great Britain’s George Crewe finished third in 17:50.

Among the ladies, Hansske clocked the fastest time across the three loops of Ski Dubai, finishing in 21:46, while Finland’s Marjaana Rakai was second in 24:04, and Diana Gogitidze of Georgia finished third in 27:10.

The participants included Nick Watson and his son Rio, who are famously known as Team Angel Wolf.

“It’s definitely a challenge,” said Nick as he walked through the snow with his 17-year-old son wrapped on his back. “We are British, but I have lived here 22 years. I think we do prefer the sun. But it’s awesome, well done. Thank you for inviting us.”

Yusra Mansur, an American who finished sixth among the ladies, also found similarly challenged on the snow. “This was challenging actually,” said Yusra. “I thought it was going to be easy, but the ice and the incline was really tough. But Alhamdollilah, I managed to finish. I completely exhausted. It was tough, very challenging, very good.”

The ski and snowboard competition will be held in two sessions – from 10am to 2pm, and then from 4pm to 8pm – and a panel of freestyle judges will be adjudicating at the event.

The winter and snow sports sector is the third segment to be opened for competition by Dubai Sports Council following weeks of closure due to COVID-19 pandemic. The marine sports sector was the first to open for competition in Dubai with Dubai Offshore Sailing Club’s Summer Series taking place on June 19. The following weekend, Dubai International Marine Club organised a “Dubai Watersports Summer Week” in cooperation with Dubai Sports Council, and six different competitions were part of the event.

The Council has used these events to honour heroes who were at the frontline of Dubai’s fight against COVID-19, by presenting commemorative medals that celebrates their efforts to the winners and participants.

The medals pay homage to the selfless service of Dubai Police and Dubai Civil Defence through the COVID-19 crisis, alongside the staff of Dubai Health Authority, and the First Responders of Dubai Corporation for Ambulance Services. Together, they were at the forefront of Dubai’s fight to contain the spread of the Coronavirus pandemic, alongside volunteers from different segments of Dubai’s diverse community.