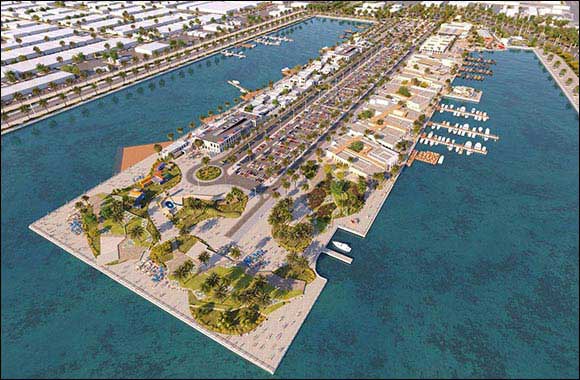 - Significant progress already made in phase one, including completion of the project masterplan and design for the new fish market, with construction underway. Out of use outlets and stores in the wharf area have been demolished

-  Mina Zayed to transform into an integrated tourist, commercial and residential destination

- Plans include the development of a new fish market, seasonal market, as well as a fruit and vegetable market. Existing souqs, including the plant souq, to be completely overhauled

Abu Dhabi, UAE – 10 November 2020: The Department of Municipalities and Transport (DMT) has launched phase two of a comprehensive renovation plan to redevelop designated areas of the iconic Mina Zayed area, and transform it into a new tourist, commercial and residential destination.

As part of the first phase of the project, the masterplan has already been completed, as has the design for the new fish market, with construction underway. Out of use outlets and stores in the wharf area have been demolished.

DMT has appointed Modon Properties to carry out the demolition of the Meena Plaza Towers in Mina Zayed, as well as redevelop designated areas in Mina Zayed.

The expansive project, which spans over three million square meters in Mina Zayed, will help foster trade and investment operations in the capital, as well as support the urban development of Abu Dhabi while safeguarding the nation’s authentic identity and heritage. Plans also include a complete overhaul of some of the existing souks, including the plant souk, as well as the establishment of a new fish market, fruit and vegetable market, and seasonal market.

Aldar Properties will also play an active role in this urban regeneration project, where it will develop prime land plots in Mina Zayed, spanning a gross floor area (GFA) of approximately 1.5 million sqm, as a sea front destination. This strategically-located project, adjacent to a vibrant cultural hub and a logistics centre, forms an integral part of Aldar’s future development plans and is in line with its ongoing commitment to develop key destinations that contribute to Abu Dhabi’s long-term growth.

The demolition of the four towers, which comprise 144 floors, is estimated to last 10 seconds.

Increased precautionary measures and procedures have been enforced, in collaboration with key strategic partners, to ensure the safety of all residents and visitors.

Commenting on the redevelopment plans, His Excellency Hamad Al-Mutawa, Executive Director of Operations Affairs at the DMT said: “Mina Zayed, which has witnessed the incredible growth of the capital over the past few decades, resonates in the hearts of Abu Dhabi’s residents.

“We are confident that the redevelopment of Mina Zayed will further drive the social and economic progress of the emirate and will play an important role in achieving our wise leadership’s vision of cementing Abu Dhabi’s position as one of the best cities in the world,” Al-Mutawa concluded.

Ahmed Al Shaikh Al Zaabi, Director of Delivery at Modon also commented: “We remain committed to the vision of our wise leadership in doing our part to transform Abu Dhabi into one of the world’s most appealing destinations through the urban development of the nation’s capital.

“We are proud to be appointed as one of the developers responsible for revitalising parts of the iconic Mina Zayed, including the fish and plant souk, as well as introducing a new seasonal market,” Al Zaabi added.

Inaugurated in 1972, Mina Zayed has served as the main port in the emirate of Abu Dhabi for over 40 years. Named after UAE’s Founding Father, the late Sheikh Zayed bin Sultan Al Nahyan, it is distinguished as one of the regional pioneers in the maritime industry, playing an instrumental role in fortifying Abu Dhabi’s international trade.