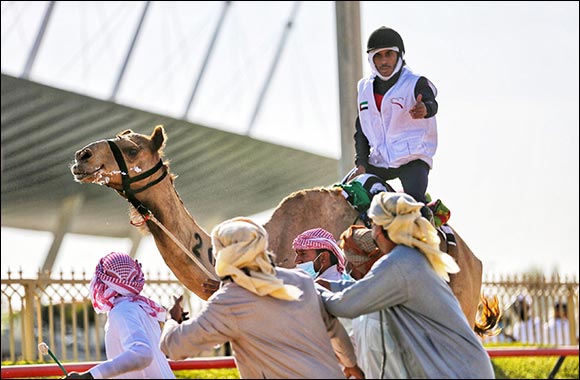 Share Home >> Entertainment
• At 17, Sultan Al Shamsi is the youngest champion of the annual camel marathon organised by Hamdan Bin Mohammed Heritage Center
Dubai, 24 January 2021:  Emirati teen Sultan Salem Al Shamsi, 17, overcame all odds and emerged victorious in the 6th National Day Camel Marathon, organised by the Hamdan Bin Mohammed Heritage Center (HHC), at Dubai’s Al Marmoom racetrack on Friday.
Held in conjunction with the Arabian Camel Festival, under the patronage of His Highness Sheikh Hamdan Bin Mohammed Bin Rashid Al Maktoum, Crown Prince of Dubai, the 11km marathon – the longest of its kind – saw the participation of 66 Emirati camel riders.
Winners
Sultan Al Shamsi won first place with his camel “Lattam” and finished the race in 20:4852 minutes. Suhail Al Humeiri came in second with his camel “Mayas” and finished the race in 21:0445 minutes, and Yahya Al Malai Al Ketbi came in third place with his camel “Ramas” and finished the race in 21:1397 minutes.
A total of Dh570,000 were also distributed to winners from first place to 30th place, including Dh150,000 for Al Shamsi; DH100,000 for second place; Dh50,000 for third; Dh30,000 fourth place;  Dh15,000 for fifth; and  Dh10,000 each for 6th to 25th place and DH5,000 for 26th to 30th place.
Grit and determination
Al Shamsi, who is only 17 years old, became the youngest winner of the annual camel marathon. He made sure of his promise last month to become the champion after he won the won U-29 Category in the 2nd preliminary race for the camel marathon.
Al Shamsi, who hails from Umm Al Quwain, said midway during the 11km race he had some trouble. His saddle was not set up properly, which made him uneasy and prompted him to be on his feet atop the camel most of the race time. Despite the hassle with the saddle, Al Shamsi was determined to lead the pack and won. He said: “It’s all about focus and determination. I did not let the problem with the saddle bother me. My focus was on the finish line and it paid off.  I loved riding camels since childhood and I harnessed my skills in my hometown in Umm Al Quwain.”
Awarding
His Excellency Abdullah Hamdan bin Dalmook, CEO of HHC, and officials from Dubai Camel Racing Club  crowned Al Shamsi and the other winners.
Rashid Al Khasouni, deputy Director of the HHC Championships Department, expressed his appreciation for the efforts of all participants in the sixth edition, starting with the preliminary races that were launched in November and December last year.  He noted the competition is getting stronger every year and the participants have become more empowered and competitive. “HHC’s vision is to continue this national sport of camel racing. We have done so by launching many races to prepare for this 11km marathon in past few years. We look forward to launching more preparatory camel races to keep the sport going all year”, concluded Al Khasouni.
Camel racing is one of the most enduring centuries-old traditional sports in the UAE. The National Day Camel Marathon is aimed at safeguarding the UAE’s intangible cultural heritage and encouraging Emiratis to participate in traditional sports in an atmosphere that exudes a sense of national pride and community spirit.