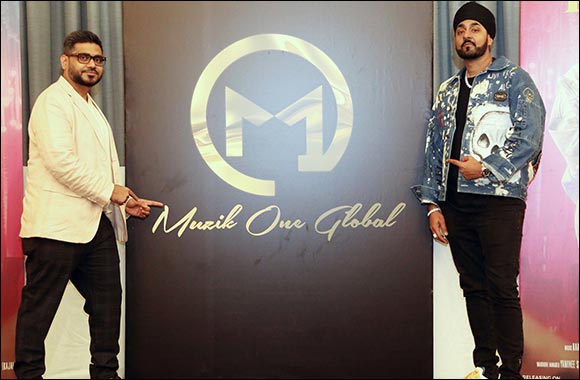 ‘Manj Musik’, popularly known for his numerous collaborations with Akshay Kumar and his foot-tapping numbers such as ‘Go Pagal’, ‘Lal Ghagra’ and ‘Swag Mera Desi’ is a leading South Asian producer, musician, singer and entertainer in the world with several hit Bollywood soundtracks to his name.
The new label and the single were launched yesterday through an exclusive high-profile event in Dubai alongside a live performance by the singer ahead of the song’s release today. Click the link https://youtu.be/uKto5SN-pmE to watch the video . The music video is now streaming on Manj Musik’s official YouTube Channel www.YouTube.com/manjmusikRDB

When speaking of the single, the story begins with a wedding scene in Lahore, with flashbacks to Dubai, where two young people from two different countries meet and fall in love. The inevitable twist in the story occurs, leaving the lead pair in a sticky situation. This love song is a treat for lovers of Punjabi hip-hop in general, and Manj’s fans in particular, since it's a passion project produced by ‘Muzik One Global’ and written and directed by Manj himself.
Talking about the song, Manj Musik commented, “It’s a very commercial song made for the masses. Everyone is sure to love it, would like to sing along and dance to its beats.”

On the occasion, Ashwin Sancheti, Co-Founder of ‘Muzik One Global’ said, “Dubai is becoming a hot destination for Hollywood, Bollywood and the music industry. Its strategic location, convenience and accessibility gives it the winning edge over other world cities; making it the preferred place for all kinds of businesses. There couldn’t have been a better place for the worldwide launch of ‘Muzik One Global’ which aims to promote talent from across the globe. Besides, our prime focus is to bring talented musicians of east and west together for collaborations thus creating a new kind of music appealing to a global audience.

We have launched the label with Manj’s new single ‘Kangna’ which is shot and produced in Dubai with some parts shot in Lahore. It gives me immense pleasure to venture into this new realm of business with a friend and to be able to fulfill a long-cherished dream of launching a record label.”
“Dubai never ceases to charm, I just love the vibes here. This is a place which thinks ahead of its time and is always creating headlines. As the world is converging in Dubai with the greatest convention starting in just a few hours, we give the city one more reason to celebrate with the launch of our new label and the single. I am happy to partner with Ashwin and looking forward to bringing a variety of genres and artists from all over the world creating original, authentic and new content for a wide range of audiences”, said Manj Musik, singer, composer and Co-Founder of ‘Muzik One Global’.
Sharing her experience and speaking at the launch, the Canadian Pakistani actor Ushna Shah said, “Working with such lovely people in the beautiful city of Dubai was an unforgettable experience. The song has come out very well and I am very sure it is going to be a big hit worldwide.”
Speaking about the future, Manj said the future belongs to the youth and our label will particularly be identifying fresh talent while helping them find their niche in the industry.
The extremely talented and amazing entertainer has worked alongside several celebrity singers and actors, not only in the East but also in the West; Akshay Kumar, Snoop Lion, Ludacris, LMFAO, TPain, Sean Kingston, Fat Joe, Public Enemy are only a few of them.
On the other hand, Ashwin is a serial entrepreneur and businessman based in Dubai with businesses and interest in varied fields. Since 2016, he has been very active in bringing various musicians, singers, comics and other artists for live-performances to Dubai through his company Spotlight Entertainment.