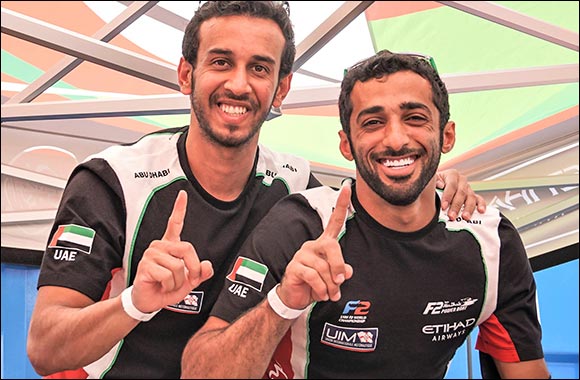 Share Home >> Entertainment
Team Abu Dhabi duo primed for back-to-back Grand Prix weekend as F2 series heads for climax
04 October, 2021: Team Abu Dhabi’s Rashed Al Qemzi will look to complete a hat-trick of victories in Portugal this weekend to revive his challenge for a third UIM F2 world championship crown.
The 2017 and 2019 champion and team-mate Mansoor Al Mansoori return to action in Ribadouro for the first of two back-to-back race weekends making up the Grand Prix of Portugal which bring this year’s series to a climax.
Al Qemzi, who won on his last two appearances in Portugal in 2018 and 2019, is chasing a third successive win on the Douro river ahead of the final round a week later at Vila Velha de Ródão.
“At the moment my mind is on Ribadouro only,” said the Emirati driver. “We have the best team in the world behind us, and I have a good feeling after winning there twice. I want to use that experience to help myself and Mansoor.”
Al Qemzi arrives in Portugal lying fifth in the championship after he and Al Mansoori – both reigning world endurance champions - were knocked out of contention at the opening round in Lithuania, won by local favourite Edgaras Riabko.
The double world champion was forced to start the Grand Prix near the back of the grid after Swede Johan Österberg crashed into him during qualifying.
Mansoori lost his chance of a podium finish 24 hours later when his boat was rammed from behind by another Swede, Daniel Segenmark, putting him out of the race.
“We were both very unlucky, but these things happen in racing and that’s all behind us now,” said Al Mansoori. “Our focus is on Ribadouro and getting the best results for the team.”
Al Qemzi, who has a 13pt gap to make up on championship leader Riabko, beat both the Lithuanian and second-placed Dutchman Ferdinand Zandbergen on his way to victory in Portugal two years ago.
His first target at the weekend will be to grab pole position on Saturday in order to set himself up for a race win the following day.
That, regardless of Riabko’s performance, would reinforce Al Qemzi’s belief that he can claim another world title a week later, and 270km further south, on the Tagus river at Vila Velha de Ródão.
He already has one world major powerboat racing crown to his name this season after partnering Al Mansoori and Thani Al Qemzi to success in the UIM World Endurance Championships in Augustów, Poland three months ago.
2021 UIM F2 World Championship leading positions
1. Edgaras Riabko (LTU) 20ts
2. Ferdinand Zandbergen (NED) 15pts
3. Rupp Temper (AUT) 12pts
4. Colin Jelf (GBR) 9pts
5. Rashed Al Qemzi (UAE) 7pts
6. Tobias Munthe-Kaas (NOR) 5pts
7. Mette Bjerknæs (GBR) 4pts
8. Duarte Benavente (POR) 3pts
9. Uvis Slakteris (LAT) 2pts
10. Lars Andresen (NOR) 1pt
1.   Rashed Al Qemzi and Mansoor Al Mansoori – one world title already this season.
2.   Al Qemzi is aiming for a third successive win in Portugal.