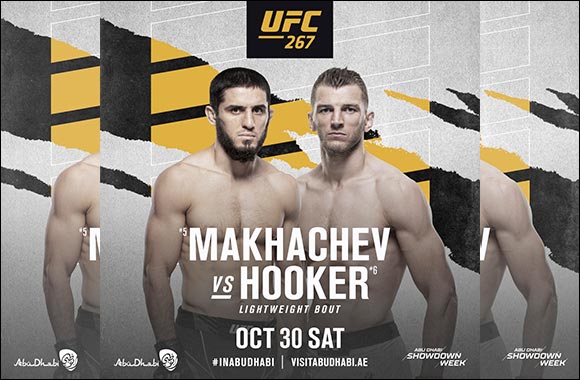 Sandhagen and Hooker Step in to Face Yan and Makhachev at UFC 267: Blachowicz VS. Teixeira in Abu Dhabi

Abu Dhabi, 04 October 2021: Two new fights have been confirmed for the eagerly awaited UFC® 267 in Abu Dhabi, with Cory Sandhagen and Dan Hooker stepping in to face Petr Yan and Islam Makhachev respectively. Middle Eastern fight fans can look forward to what promises to be a spectacular occasion at Yas Island’s Etihad Arena on Saturday, October 30, with the bout between Jan Blachowicz and Glover Teixeira headlining the event. Tickets are available now via Ticketmaster.ae and etihadarena.ae.

UFC’s interim bantamweight belt will be on the line when Petr Yan (15-2), from Russia, takes on USA’s Cory Sandhagen (14-3), who recently put on a stellar performance against Frankie Edgar. New Zealand's Dan Hooker, meanwhile, faces  Islam Makhachev in a hugely exciting lightweight bout.

Hooker (21-10), who can often be seen training in Dubai, fought to a decision win over Nasrat Haqparast only a week ago at UFC® 266 in Las Vegas. He will fill the shoes of Rafael dos Anjos, who was originally slated to face Makhachev (20-1). The rescheduling at short notice reflects Hooker’s determination and desire to become one of the top-ranked lightweight contenders.

Makhachev goes into the fight on the back of eight straight wins, which have seen him climb to no.5 in the lightweight rankings - with 'The Hangman' set to become his highest ranked opponent to date.


UFC 267: BLACHOWICZ vs. TEIXEIRA takes place on Saturday, October 30 at Etihad Arena on Yas Island, Abu Dhabi, with the main card starting at 10 p.m. GST. The first preliminary bout will kick off at 7:00 p.m. GST. It will be headlined by light heavyweight champion  Blachowicz putting his title on the line against  Teixeira, and Khamzat Chimaev makes a much-anticipated return when he takes on Li Jingliang.

UFC 267: BLACHOWICZ vs. TEIXEIRA will be shown live via global broadcasters across the world. In the UAE and throughout the rest of the Middle East and North Africa, UFC content is broadcast on Abu Dhabi Sports and streamed on UFC Arabia, UFC’s first Arabic-language streaming subscription service in the region.

Tickets are still available through Ticketmaster.ae and etihadarena.ae starting from AED 495. Tickets are limited to six per person.