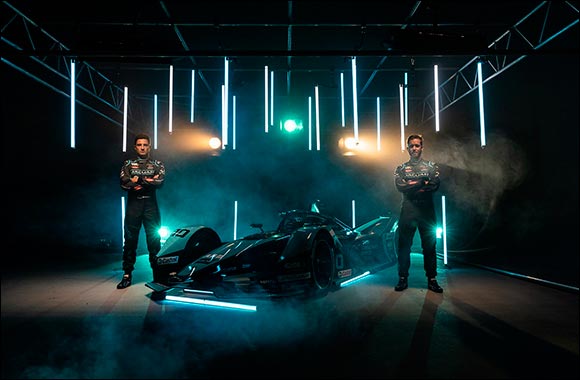 Share Home >> Automobile
• Jaguar TCS Racing are prepared for the inaugural ABB FIA Formula E World Championship race of season eight in Diriyah, Saudi Arabia
• Formidable driver line-up Mitch Evans and Sam Bird start the season focussed on podiums, wins and the World Championship
• After a win and podium last time out in Saudi Arabia, the team have positive form on the 2.49km track
• The Diriyah race weekend is the second night race double header in ABB FIA Formula E history
• Lights go green on the streets of Diriyah, Saudi Arabia at 20:00 local time on 28 and 29 January 2022
Dubai, United Arab Emirates, 24 January 2022:   Jaguar TCS Racing travel to Diriyah, Saudi Arabia for the first two races of the 2021/22 ABB FIA Formula E World Championship and for the second night race weekend in Formula E history.
Mitch Evans – who starts his sixth season with the British racing team – lines up alongside Sam Bird for his second season with Jaguar in Formula E. After achieving a podium and a win last time out in Diriyah, the formidable driver pairing start the season at a track where they have both been highly competitive in the past.
The Diriyah circuit provides an entertaining circuit for both the drivers and the fans. With high speed, challenging corners in sectors 1 and 2 and longer straights in the final sector there are plenty of opportunities for overtaking.
The duo will drive the Jaguar I-TYPE 5 under the lights in Diriyah, which has shown positive performance during official testing and will be central to the team achieving podiums, wins and fighting for the World Championship.
James Barclay, Jaguar TCS Racing Team Principal: “At Jaguar TCS Racing there is great excitement to be starting season eight of the ABB FIA Formula E World Championship. After such a competitive season seven, we have been working hard as a team to put ourselves in a strong position this season and we can’t wait to finally go racing in our Jaguar I-TYPE 5 and start the fight for World Championship. With a new qualifying format there are undoubtedly things we are going to learn this weekend, but we are looking forward to the lights going green once again.”
Mitch Evans, Jaguar TCS Racing driver #9: “Last season we showed as a team exactly what we are capable of, and we are ready to do that again this year. It is my sixth year with the team and together we all have a real commitment to put the Jaguar TCS Racing team on the podium and be consistently winning races.”
Sam Bird, Jaguar TCS Racing driver #10: “Diriyah has always been a great track for me personally – I have won here multiple times and am very much focussed on doing the same again. I also have very fond memories as I secured my first win for the Jaguar TCS Racing team last time out. We all have a great determination to start strong after such a competitive season last year to ensure we are fighting for podiums, wins and the World Championship.”
Phil Charles, Jaguar TCS Racing Technical Manager: “Diriyah is a really interesting track for Formula E, there are a lot of elements that the drivers and the engineers have to perfect in order to compete at the front. The first two sectors are fast and flowing with multiple high-speed corners linked together, while the last sector has longer straights and a big braking event for the T18/19 chicane. The track has also recently been resurfaced. With the new surface, there is quite high potential for significant track evolution through the weekend. As a night race, the drop in temperature from the qualifying session to the race will also be key. It means Diriyah is a particularly tricky circuit but one that offers a challenge that Jaguar TCS Racing revels in.”
The inaugural E-Prix of season eight commences on the streets of Diriyah, Saudi Arabia at 20:00 local time on 28 and 29 January 2022


Zip in and Zip out with Nissan's 60-min Express Service

Post Expo 2020: Brazil keeps up the Momentum for Sustainable Opportunities of th ...

Indulge in the World of Refreshing Coffee Concentrates by Intellect

Double Your Productivity with the LG Gram +View

Gifts for Every Occasion with Pandora

Hotpack Grows its Foothold in Morocco, joins Hands with Retail Holding in Region ...