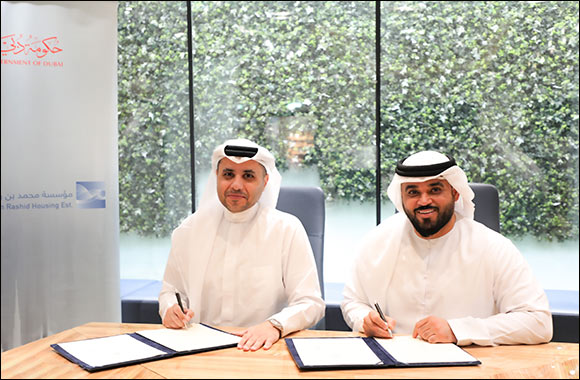 United Arab Emirates, Dubai:  Union Coop signed a Memorandum of Understanding (MOU) with the Mohammed Bin Rashid Housing Establishment, according to which it provides financial support to support its community initiatives, thus contributing to improving the lives of community members.

This agreement falls within the framework of the Union Coop's programs to enhance cooperation with the government sector, participate in initiatives directed at members of society, the agreement also aims to expand its role in community development. Under the agreement, the Union Coop provides purchasing cards for people with low incomes and other groups benefiting from the initiatives of the Mohammed bin Rashid Housing Establishment to distribute the cards to them.
H.E Khalid Humaid Bin Diban Al Falasi, The CEO of the Union Coop, said that the contribution of  Union Coop in supporting the initiatives of the Mohammed bin Rashid Housing Establishment comes from the standards of its social responsibility during the blessed month of Ramadan and within its initiatives and societal contributions to develop the spirit of social solidarity and support members of the community, indicating that the work the collective cooperative is considered the real force that contributes to bringing about change in society through concerted efforts to increase production, development and progress and provide the needs of society, in a manner that meets the directions, vision and aspirations of the wise leadership, to enhance the system of success in work and strengthen the bilateral relations between the two sectors.

H.E Omar Hamad Bu Shehab, CEO of the Mohammed Bin Rashid Housing Establishment Said, stressed the important pioneering role played by  Union Coop in the societal field and community support, and the upgrading of the national economy and retail trade, explaining that the cooperative’s support for the beneficiary groups of the Corporation will have many positive impact that reflect the values the highness that the UAE society was brought up with, and their keenness on the principles of social solidarity through such social initiatives. The signing of the MOU comes within the framework of keenness to activate the partnership between government institutions and the private sector, and to unify efforts to serve locals.

Géant's Back to School Fest Promises Great Variety and Value