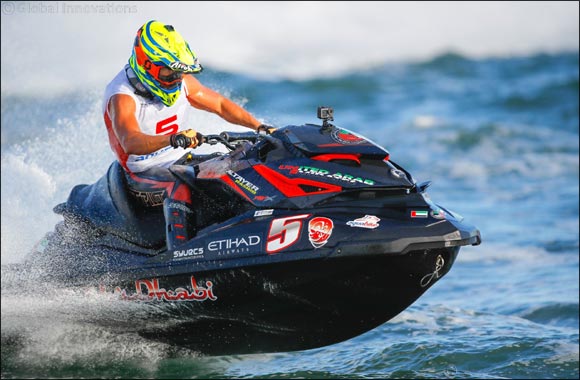 Share Home >> Entertainment
Al Mulla on top again in Italy as Al Tayer stays in hunt for Runabout GP1 title
Abu Dhabi, UAE, 9 June, 2019: The season is not yet half over in the 2019 UIM-ABP Aquabike World Championship, but Team Abu Dhabi are looking good in their quest for a double title success.
While reigning world freestyle champion Rashid Al Mulla continues to appear unbeatable, team-mate Rashed Al Tayer remains very much in the hunt for the Runabout GP1 crown, despite enduring more than his fair share of misfortune in the Grand Prix of Italy.
The series now takes a break until later in the year, with a third round in China as yet to be confirmed ahead of the other rounds in India in November and finally Sharjah in December.
Al Mulla, who made it eight Grand Prix victories in a row in Italy, now holds a 12-point lead over Italian Roberto Mariani, after polishing and adding to the spectacular routine which took him to the world title last year.
Having arrived in Italy holding a share of the Runabout GP1 championship lead, Al Tayer left Sardinia two points adrift of the new front runner, Denmark’s Marcus Jorgensen, believing he is nicely poised to strike for the front.
Towed off the Olbia circuit with technical problems in the second qualifying session, the Emirati
produced a superb fightback in the first of the weekend’s two motos, starting it down in tenth
position but surging through the field to grab second place behind Kuwait’s Yousef Abdulrazzaq.
The result gave him a 16-point championship lead, although his hopes of extending the advantage were dashed when he lost the lead on the start lap in the second moto because of a technical issue.
After re-joining the race in last place he was black-flagged on the next lap for a course infringement, but was philosophical at the finish.
“Just after the start I had an ignition censor problem,” said Al Tayer. “When I re-started I just got it all wrong, but you learn from these things and that’s what makes you improve as a competitor.”
There was more success for Team Abu Dhabi in the one-off Runabout GP2 event which saw Salman Al Awadhi following up his second and third places in the first two motos with victory in the third to finish runner-up overall to Denmark’s Marcus Jorgensen
It’s no surprise that spirts are high at Abu Dhabi International Marine Sports Club, with Shaun Torrente and Thani Al Qemzi firmly in control of the F1H2O World Championship after their recent one-two success in Portugal.
Captions:
1. Rashed Al Tayer - hindered by technical problems in Italy but still well in the hunt for the Runabout
GP 1 title
2. Rashid Al Mulla – the reigning world freestyle champion looks unbeatable after an eighth Grand Prix
win in a row
3. Salman Al Awadhi – a race victory in the Runabout GP2 event in Italy.