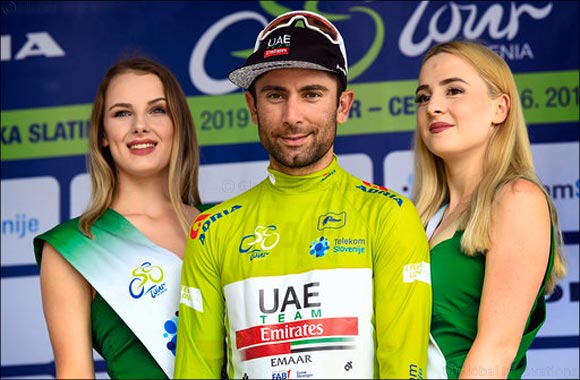 Share Home >> Entertainment
Dubai, United Arab Emirates - 24 June 2019:  It was a weekend to remember for UAE Team Emirates as Diego Ulissi, Tadej Pogačar and Jasper Philipsen all stepped onto the podium in their respective races, with UAE Team Emirates also taking home a Team Classification win.
Ulissi topped the General Classification (GC) standings at the Tour of Slovenia after a solid performance across the week, finishing 22” ahead of his nearest competitor. At the same race, Tadej Pogačar went home with the Youth Classification and narrowly missed out on a top three GC finish; finishing fourth overall. It was smiles all around though, as the team’s overall efforts were rewarded with the Team Classification title.
Meanwhile, Jasper Philipsen sprinted to third place at the Elfstedenronde one-day race in Belgium.
Commenting on his victory, Diego Ulissi said: “I’m in great form at the moment so coming here I wanted to make the most of that. I’d like to thank the whole team, we raced really smart on all five stages: with the talent of Pogačar and Polanc, the strength of Rui Oliveira and Consonni, and the experience of Marcato, it made everything much easier.”
Commenting on his podium finish, Philipsen said: “I have to thank the team for all the work they did. They worked hard to pull the group along and then Troia and Ferrari delivered me perfectly for the sprint. I had good legs, but maybe I left it a bit too late to open the sprint. I’m satisfied with third place though.”